I remember the first time I tried to write by hand.

Another child who was slightly older than me had come over to our house to play and she’d brought a pad and pencil — one of those big pencils they used to give us as pre-schoolers. It had Snoopy on it or some such thing. The writing pad was one of those landscape-bound cheap pads made with inexpensive, grayish paper bearing rows of solid and dotted lines. I distinctly remember the older girl showing me how to write an ‘A’ and getting super fucking excited about it.

Even in preschool I’d already begun to understand the power of language. Like most children, I was first introduced to the written word through reading. My parents read out loud to me before I could talk. Unsurprisingly, then, I was an early reader and books became my constant companions throughout my life. At a tender age, I came to understand that printed words unlocked all kinds of awesome things in my brain, and that the world was filled with words just waiting to be discovered.

But writing was like a second revelation to me.

Taking a pencil in my untrained hand as a very little girl was the moment I discovered that I could actually make words myself. Immediately I begged my mom for my own writing pad. I was four, and I was ready to write.

As enthusiastic as I was about learning to write, however, I was definitely not enthusiastic about having someone teach me. I specifically remember being bummed out when I realized (only after getting a big pencil and notepad of my own) that I didn’t get to just write the letters any old way. I had to follow very specific instructions on how to draw each line and curve. It felt insulting that the authorities in my life would try to dictate in such detail the actual, visual manifestation of what I had to say. But they insisted.

I went along begrudgingly with the whole “proper handwriting” agenda until the fifth grade when I received a B- on my report card with a short note from my teacher about the deficiencies of my script.

For such a crime I was sentenced to months of daily handwriting practice at the kitchen table after school. I don’t even remember what I wrote. Just lines and lines. The content didn’t seem to matter. The form had been divorced from the function. I’d sit, perched over my paper, in a trance, watching my hand move for the sole purpose of making my words pretty.

This punishment of writing lines to improve my handwriting (which to this day I contend was judicially unfair), changed something in me. After that point, writing started to become something I did all the time, in all kinds of places. It was almost a compulsion. Wherever there was a scrap of paper I’d find it and start scribbling on it. It was soothing, and it helped me sit quietly and focus. After doing it repetitively for so long – first by punishment, then for the comfort it brought me – I began to find it pleasurable.

Many times I’d write unconsciously, in a trace, using word association – an exercise in limbering the mind and fine-tuning the hand-eye coordination. Sometimes I’d work on a story or poem. I’d practice writing my favorite words over and over again, just for the joy of seeing them appear on the page. I’d also make lists, journal, scribble notes and ideas, etc.

I realized a few years ago that I’d almost stopped handwriting completely. For more than a decade, if I did write anything by hand it usually related to some piece of mail, or an occasional birthday card. I still kept notebooks and stuff, I just wasn’t really using any of them on a regular basis.

But then two things happened:

Last year I was in one of the darkest depressive episodes of my life. I realized that I needed – needed – to pick up a pen again and write some things out of my head. A laptop wasn’t going to cut it. I needed to see what I had to say in my own hand. It was a holy compulsion, and for once in my goddamned life, I decided to trust myself and just go with my intuition.

Second, my friend Susan introduced me to a short-lived-but-has-crazy-cult-following television series based on the life of Anne Lister, a historical figure and ‘the first modern lesbian’ – who wrote a diary of around 5 million words over her lifetime. And she only lived to be forty-nine. The show is great and it totally deserves its cult following – but my big takeaway from that series was how Anne seemed to depend on her writing. She trusted it when she could trust no one else in her life with who she was. It made sense.

Anyway, when I started writing again last year, it was like riding a bike. It took a few weeks to get into a groove with it, but now, I’m back to handwriting all the time. (I will say, there was some initial discomfort with my right hand. I had to rebuild some of those muscles and so when I started writing daily I could only write for maybe five minutes at a time before stopping because my hand was hurting. I write pages now, no sweat.)

(Un?)fortunately, my renewed zest for writing by hand has come with a small liability. Perhaps it’s because the world is smaller and there are more things in it than ever before; perhaps because we didn’t have a lot of disposable income growing up. But I now understand the pure lust that may be evoked by a well-stocked stationery store.

How can I describe what it’s like — to enter a space filled with things that are designed to delight that weird little part of you, deep inside, where your creator lives? The colors and textures – infinite variations and combinations. Paper and notebooks and pens and ink. Stickers and watercolors, and tiny paperclips shaped like kittens. The air is cool and dry. The clerks and clientele? Appropriately funky.

To write by hand is a joy. To be able to write on a $15 journal made of smooth-as-silk Japanese paper when just a $.99 spiral notebook would serve the same purpose – well that, my friend, is what I call real luxury. (With regard to pens, I personally don’t think you need expensive pens. I mean, it’s nice to have some expensive fountain pen but it may not be your best for everyday writing. Find something you can buy by the box – stash them all over the place, especially in the goddamn car – and keep ‘em on auto-ship from Amazon.com.)

Aesthetics aside, what I’m realizing these days is that writing by hand has – dare I say it? – a mystical aspect to it. At least, it does for me. Sitting quietly with what amounts to a magic wand cradled between my fingers, taking dictation from my unconscious, has the effect of pulling things out of me that I keep hidden from even myself. It gives me the ability to think critically, dispassionately about my own thoughts. It provokes me to think creatively about everything in my life. It provides me with a sense of comfort and contentment; a silent morning with my notebook on my lap and a cup of fresh coffee is the very definition of peace. Writing by hand demands the kind of reflection that creates a foothold for honest, private, personal growth.

Also. It feels fucking amazing. It’s a delight to the senses. To see the abstract from inside my head spilling forth in Royal Blue, taking form at the end of my nib is to begin to understand the reality of self. It’s an affirmation that I am here, and real, and that I have things to say, and beautiful ways to say them. Watching the sheen of fresh ink in the lamplight, pausing to take in the wonder of language – the lifeblood of civilization – and feeling a sense of awe that I can make it appear, at will.

When I’ve asked other people about their handwriting habits, most of them dismiss it as an inefficient and practically useless activity. I would argue that the inefficiency of writing by hand is actually its strongest selling point (not that I want to sell you on it). I’m no technophobe, but we’re becoming increasingly integrated with and dependent on digital technology, and it’s starting to impact our humanity. For real.

I’m not saying that writing by hand is *the* antidote to our culture of transactional engagements and ego-driven content-as-communication. But, like, anything that you can do to keep yourself here, grounded. On the earth. In your body. Do more of that.

Maybe handwriting ain’t your bag. But I hope something is. I hope there’s something that you do that helps you see yourself clearly, as a creator, in three-dimensional space. I hope you have a chance to take stuff out of your head – stuff that has been bothering you, stuff that has been waiting patiently for you – and look at it in black-and-white, in a private way, and then process it. And then grow.

Yes, it may result in a slightly unhealthy addiction to stationery stores and a new desire to sit under trees and pour your heart out to no one but yourself on beautifully crafted notebooks – but there are worse addictions. 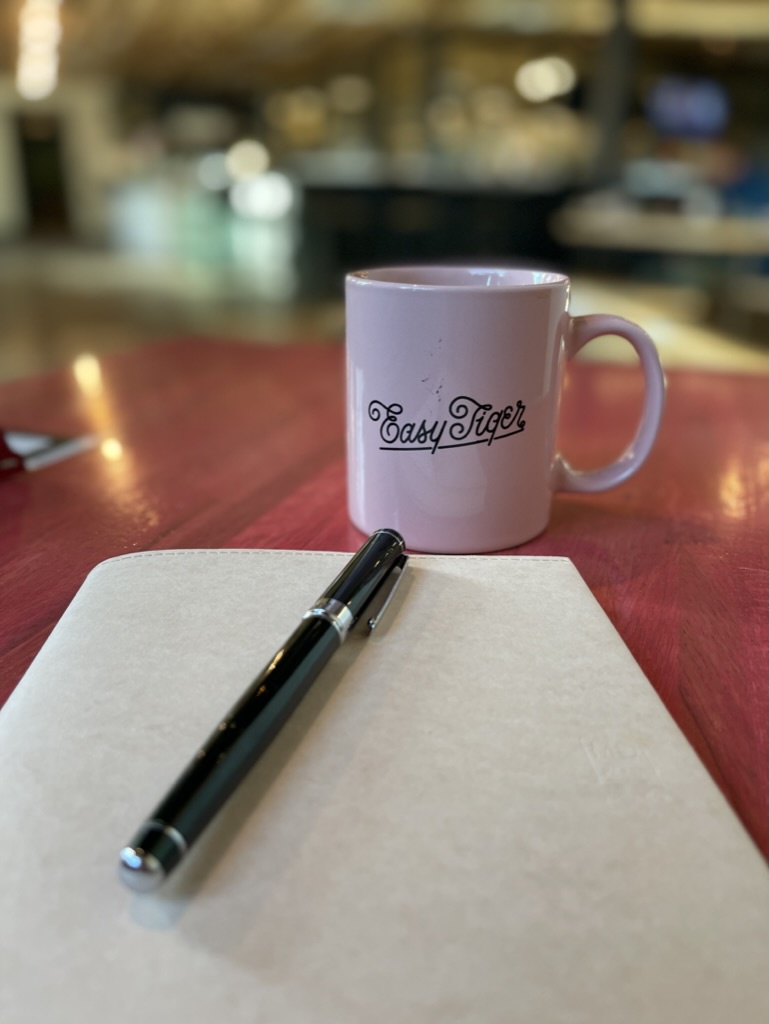 There's no greater honor for a writer that the time and attention of a thoughtful reader. If you've enjoyed your visit here and would like to support my work, please know that anything you offer is accepted with gratitude:

And if you're looking for a nice place to hang out on the internet, consider joining me on the RealSocial.Life federated community.